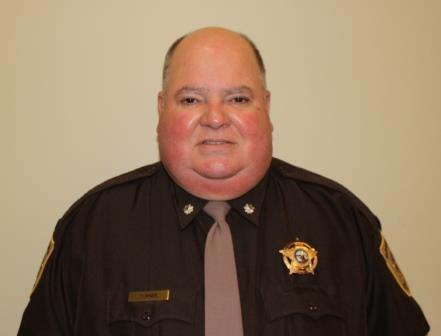 Chief Deputy Steve Turner moved to Roanoke County in 1967. He served in the Army as a Military Policeman at Fort Bragg and in Pusan, Korea from 1973 to 1976.

His duties included assignments in confinement facilities as well as special security details. Upon his end of his term of service he received the Army Commendation Medal for his service as the non-commissioned officer in charge of the Mobile Security Section at the Provost Marshall Office in Pusan.

After leaving the service he began his career with the Roanoke County Sheriff's Office as an auxiliary Police Officer in November 1976.

In September of 1977 he was hired as a Deputy Sheriff for Roanoke County working through the ranks to Lieutenant assigned as a shift commander in the patrol division. At the formation of the Roanoke County Police Department in July 1990, he was transferred to serve as a shift commander within the new department. He has served in many capacities throughout the department with his last assignment as the Commander of Special Operations. After 25.5 years with the Police Department, he has transferred back to the Sheriff's Office where he was appointed as the Chief Deputy.

In addition, he has served as a volunteer fireman at the Cave Spring Fire Department from 1978 to 1983. He has been honored to serve his country and the citizens of Roanoke County in many capacities for more than 42 years. He looks forward to serving the citizens in his role as the Chief Deputy for the Roanoke County Sheriff's Office.

A longtime resident of Roanoke County, he currently resides in the Hollins area with his wife Vicki. His children Jennifer and Lindsey graduated from Northside HS with Lindsey currently attending Campbell University. All of the family are members of South View United Methodist Church.

Chad currently resides in Roanoke County with his wife, daughter, and two Boxers.

My time spent in the Marines while being deployed consisted of kinetic clearing operations, multiple daily patrols in different cities throughout the Al Anbar Province of Iraq and searching homes of possible insurgents, collecting ordinance that were being used to deploy IED's and disposing of those items, all while trying to keep a positive relationship with the citizens of Iraq.